‘I know how it feels to fear for your life because of an abusive situation but to be too afraid to leave.

I know how it feels to be unable to confide in your family and friends or even call the police in fear of how you and the people you love could be affected.

I know how it feels to have your every move, conversation, text message, and financial transaction monitored, forcing you into a state of mental paralysis.

I know how it feels to finally escape and not have the necessities with you to allow you to rest and recover soundly for the first 24 hours.

Founding Escabags was not about starting something; it’s about ENDING it.’ 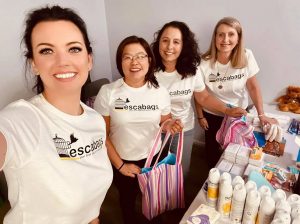 This is her story…

“The perpetrator of my abuse was abusive physically, sexually, financially and psychologically, and covertly packaged this as ‘love’.

This person was (and is) a manipulative and twisted predator. He saw the injured child in me very early on and used it to his advantage.

He collected a log of my biggest insecurities and fears in his mind, only to use them against me or manipulate me in the most twisted of ways.

In fact, the only time I ever stopped fearing him was when I didn’t value my own life or existence anymore because I didn’t see a way out. This was bigger than me, bigger than I could handle emotionally.

And why didn’t I ‘just leave?’ – the golden question many of us get asked so often.

The truth is, I was trapped. I was too scared to stay, but leaving was just as terrifying. The perpetrator of my abuse monitored every conversation and move I made through the use of software installed on my mobile phone and a tracking device on my vehicle – until eventually, I just stopped talking, and I stopped moving. Going to the police
was not an option through fear of the serious repercussions, and later I would find out that this was something he had a history of with previous partners.

There were so many violent incidents, but it was the 18th August 2018 where I felt most vulnerable and petrified. As he sat on my chest, with his hands around my throat and knees digging deep into my shoulders, I genuinely thought the bottom of the radiator would be the last thing I ever saw in my life. I’ll never forget how his eyes turned black. Fortunately, I always kept a spare car key in my bra when things felt particularly hostile. I crawled out of the house, got into my car and managed to seek refuge at my nearest friends home.

The next morning the same friend took me to the local Supermarket to get all the essential toiletries that I needed for the next couple of days. I’ll never forget how people looked at me and then each other as I entered the store. Visibly they could see I’d been very violently attacked; however, something they couldn’t see was that emotionally I was completely and utterly broken, and their stares were not helping. Never in my life had I felt as vulnerable as I did that day. 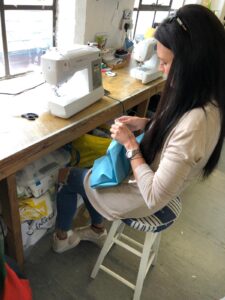 Little did I know that it would be that horrific experience that would later become the idea for Escabags.

Sadly after three months of working hard to rebuild my life again – I went back to him. The bruises had gone, but emotionally I was still a complete wreck and desperate to feel ‘better’. He was both my poison and my remedy, and it was this ‘trauma bond’ that outsiders looking in were failing to understand.

I fell for the empty promises ‘no more violence,’ he whispered, as he proposed to me on my 30th Birthday, but by Christmas Eve only a month later, he threw a 42 inch TV at me, nearly breaking my arm as I protected my head – I still have the scar.

Nothing was going to change, and this was going to be my life. I knew deep down he would go too far one day, or I would end up taking my own life.

It was March 2019, whilst holidaying in New Zealand and Australia, when he attacked me again, but this time, it would be the final time.

I sat alone in a separate room in only the clothes I had been wearing that evening bruised around my neck from where he had attempted to strangle me with my dress. He had my passport and my bank cards, ‘what the hell am I going to do now?’ I cried to myself.

Fortunately for me, I had met a wonderful Australian family who, after seeing me alone on many occasions, took me under their wing whilst on their own vacation. There was a knock at my door at 7am, the Security Manager and six very concerned faces – my Australian friends. They took one look at each other and then back at me and said,

This is going to be the first day of your new life. You are coming home with us.”… and I did.

After a week in Sydney, I returned home to the UK, ‘back to reality’ I thought. I spent four months in a women’s shelter, which unfortunately wasn’t the ‘safe haven’ I had expected either.

I lived off anything that could be made using the hot water from the kettle I had in my
room – mainly noodles and porridge. As a result, my weight plummeted to 50 kilograms, and I started to lose my hair. In some ways, the abuse had continued because now I was abusing myself.

During these long and isolated four months, there was always one daily phone call that gave me a reason to get up out of bed, and that was from my Aussie Mom or “Maussie” as I like to call her, one of the ladies who had rescued me.

When I told her that my abuser had located me again after being followed home, she simply said, ‘Come home, Bub’ and inn August 2019 I decided to move permanently to Australia and applied for a ‘Protection Visa’.

In January 2020, just four months after being in Australia, something cracked, and I was quite unwell.

I suffered from terrible nightmares, flashbacks and panic attacks, sometimes three or four times a day.

Maussie took me to the doctors one day and then to the hospital, where I was diagnosed with Complex Post Traumatic Stress Disorder (CPTSD)

I think I had spent so long in ‘survival mode’ that when my brain and body started to relax over here, the magnitude of what had happened finally started to dawn on me. Back in the women’s shelter in the UK, we were always encouraged to participate in activities, but nobody did. Either too anxious, too depressed or struggling with some
kind of addiction. But there was one class a ‘Make & Mend’ afternoon, where I thought ‘I quite fancy that’ and I went and learnt the basics of a sewing machine and how to make a simple tote bag.

So after I had been diagnosed with CPTSD, I decided to invest in a sewing machine here in Australia, hoping it would help alleviate some of the panic attacks I was having.

I got to the point I had made so many bags I think everyone I knew would have had one every Christmas for the rest of their lives. So I started to consider what I could do with these bags to help other domestic abuse victims that were currently in a situation that I was once in.

This was when I thought back to the horrible time in the Supermarket – buying my essentials after being attacked. ‘That’s it!’ I thought…

Free Escape bags for domestic violence victims and their children to be easily accessible no matter what time of day it is, to avoid that trip, to avoid that feeling.

On 19th February, I, like many of us woke up to the heartbreaking news that Hannah Clarke and her 3 beautiful children had been murdered by their own Father and her Husband whom she had separated from.

Hannah and I were the same age, and there were many similarities between us and the type of abuse we had endured.

That evening, I stayed up all night and completed the Escabags website. I promised myself that I would never feel like that again. That I possibly could have helped someone in a similar situation but didn’t through lack of confidence and fear of failure.

Sometimes escaping an abusive or dangerous situation isn’t just about finding emotional support; it’s about having a practical solution available that will save your life, and that’s what Escabags is.

I started Escabags in February 2019 as a small project from home. I didn’t expect it to become a national charity, and I certainly didn’t expect to have the letters CEO following my name. I feel very uncomfortable with that title because I am still learning every day, but having a negative mindset and worrying about those kinds of things is counterproductive – and I have a mission to carry out.

I don’t have a Diploma in Business or a Degree in Law, but I do have life experience, and I know who I am.

I am a kind, caring, empathetic and resilient woman, and due to those life experiences, I now possess a specific set of life skills that have enabled me to get this far. Because I did escape, I did survive, and in my eyes, if I am making a positive difference to people’s lives from a bad experience in my own, then yes, I am succeeding.

In just 12 months, Escabags Ltd became a registered Charity distributing our ‘Escape Bags’ across the country via over 600 stockists, which is a number that continues to grow every week thanks to the generosity of our courier partners Think Global Logistics.

Founding Escabags was not about starting something; it’s about ENDING it.

And I believe, with the correct education, legislation and compassion for one another we can and we will put an end to domestic violence.”